Please switch to a modern browser like Chrome, Firefox or IE10+ for better experience.

for All platforms
DomiNations

DomiNations
All platforms
OR
Thanks for contacting us. Your message was received.

How does Multiplayer Battle work?

Multiplayer Battle is a player vs. player (PvP) feature where a single player attacks or defends against another player. Medals and resources are gained and lost on both attack and defense.
How much damage is required to win a battle?
To win a battle, a player will need a minimum of 1 star. There are 5 different stars that can be awarded:
Quick Victory: Any star received within the first minute of battle
Town Center: Destroy your opponent’s Town Center
50% damage: Destroy 50% of your opponent’s town
75% damage: Destroy 75% of your opponent’s town
100% damage: Completely destroy your opponent’s village
How are my opponents chosen in multiplayer?
Multiplayer Battle opponents are chosen based on both the attacker and defender's current age and each player's current number of Medals. Our system matches players within a large range of Medal counts to ensure there is a wide variety of opponents. It also allows for attacking players that are within one Age.

Rest assured, the number of medals won or lost in battle is determined by the difference in medals each player has. The higher the medal count of your opponent, the greater the medal reward you will gain for a win and the lesser penalty you will suffer for a loss.

If you receive the message "No Opponent Found" this means that there are no more players available for battle in your current matchmaking pool. This could be because you have cycled through all available players, or that all of the players in your pool are currently logged in, or under peace treaty. If this occurs please be patient and try matchmaking again later. Keep in mind that the more competitive your medal range, the fewer players will be eligible to be matched with you.
How are Medals calculated in Multiplayer Battle?
The number of medals won or lost in battle is determined by the difference in medals each player has. The higher the medal count of your opponent, the greater the medal reward you will gain for a win and the lesser penalty you will suffer for a loss.
How do I control my troops after deploying them?
Different troops have different attack preferences. By using your “Rally” (red target) button after your troops have been deployed, you can command your troops to target a specific building or location. Rally does have a cooldown after being used. 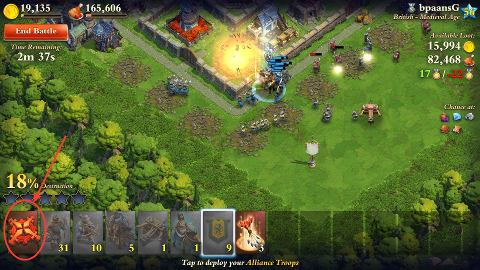 Some of my troops survived the battle. Where did they go?
Troops will only survive battle if all defensive buildings have been destroyed in the attack. Once the attack has successfully completed and all defensive buildings have been destroyed, your surviving troops will return to their Barracks, Factory, or Airstrip.
Generals will also survive if all defensive buildings have been destroyed; however, a cooldown will be applied based on the amount of damage they suffered, up to a maximum of 24 hours.
Surviving Mercenaries and donated troops will not return to your village if they survive battle.
Why am I being asked to wait before returning from battle?
If you are playing on a slow connection, or lose network connection at some point during battle, you may be asked to wait a few minutes before returning to your town. This is so that we can make sure your battle data has been accurately recorded. If we are not able to save your progress at this time you will see a network disconnect.
Last Updated: 423d • Permalink
ICP 2020026027-1

Your browser does not allow you to contact us from this page because third party cookies are disabled. Click continue to open this form in a new tab.

Something went wrong! Please reload and try again. We're sorry for the inconvenience.

You're navigating to a different app. You'll be able to continue the current conversation only when you switch back to the current app.