Please switch to a modern browser like Chrome, Firefox or IE10+ for better experience.

for All platforms
DomiNations

DomiNations
All platforms
OR
Thanks for contacting us. Your message was received.

How does the number of Medals I have determine my League?
Each time you win a Multiplayer Battle you earn medals. The number of Medals that you begin a Season with will determine the League that you are placed in for that season. You can see how many medals are needed to advance to the next League by tapping your Medal count and then tapping the League you are in at the top to view all of the Leagues.
How are Leagues subdivided?
Each League is subdivided into three Divisions, with III being the lowest and I being the highest. Battle Bonuses vary between Divisions, while Daily Dock Bonuses are only determined by your League. 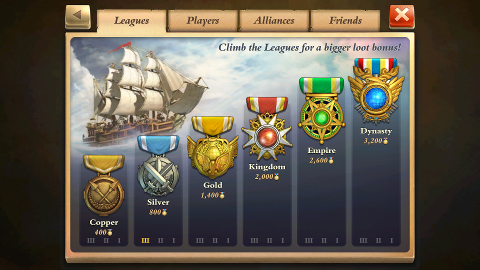 I dropped below the Medal count for my League! How long before I am moved down a League?
Medals are recounted at the first Multiplayer Battle of each Season, so any Medals lost in the middle of a Season will not affect your League ranking. The time remaining in any given season can be found on the right side of the "Leagues" tab. 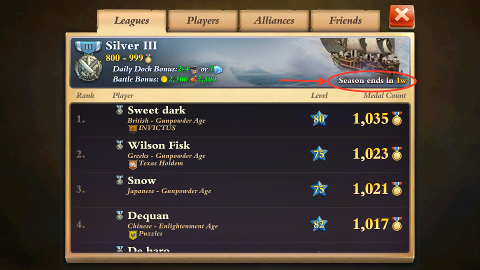 Why am I not in a League?
You may not be placed in a League if you're Medal count is below 400, or if you have not completed a multiplayer battle yet this Season.
If you meet these requirements and still haven’t been placed in a League, this may be due to a server error, and we encourage you to contact us via the in-game support system: Settings (gears icon)> Customer Service.
What rewards do I get for being in Leagues?
The rewards for your current league are listed in the Leagues tab, which can be found by tapping your Medals icon. Daily Dock Bonuses can be picked up once per day at the dock to the south east of your village. The higher your League, the more trade goods you have a chance to earn. Battle Bonuses are earned in addition to your other spoils for earning at least one star in a multiplayer battle. These rewards will also increase as you climb the Leagues. 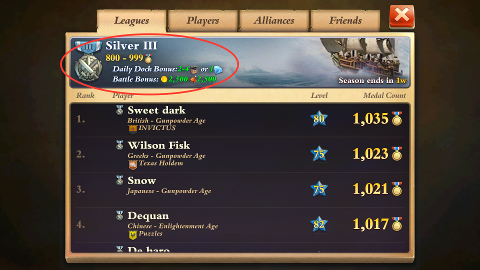 League Achievements
While striving for the League Ranking Achievements, you will see a number that corresponds with the amount of progress made towards the goal. The achievement progress always displays the highest league you’ve reached, even if you fall to a lower league. Due to this, you may not always notice the tracker move every time you move up a league.
How do Seasons work?
Players are sorted into Leagues each Season. Once a Season has ended all players will be temporarily not placed in a League until they complete a Multiplayer Battle. Once you have completed a battle in the new Season you with be re-ranked into a League based on your Medal count. Each season lasts 2 weeks, and the time left in a given Season can be found on the Leagues tab.
Last Updated: 915d • Permalink
ICP 2020026027-1

Your browser does not allow you to contact us from this page because third party cookies are disabled. Click continue to open this form in a new tab.

Something went wrong! Please reload and try again. We're sorry for the inconvenience.

You're navigating to a different app. You'll be able to continue the current conversation only when you switch back to the current app.